Tattooing in a mans world? 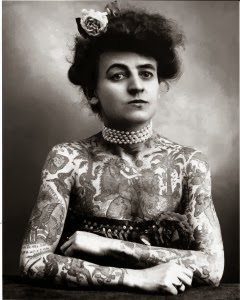 God. I have been wanting and meaning to write about this forever but as I have blabbered before about my life- I am tattooing, running a business, rearing a little one, painting for fun in my studio at home after work- which was after dinner that I made for my family- so, you get it. But I often say, I only have one life and I hate being lazy! I am compelled to do what I do and this topic for an article has been on my mind since I have indulged in this blog...I am not even sure where to start on this one...
When I first started tattooing there was definitely only a small handful of women in tattooing. Few women got tattooed as well. I think I adjusted to being the only girl in the shops I have worked at because since a young age I always hung out with boys and was interested in what the boys were doing. I grew up as a tom boy. So when I was introduced to tattooing I was comfortable enough. It was not until a few years later that I found out that there is a weird rivalry between women and men that tattooed.
Honestly, I do not even know where to begin on this one...
From what I know about tattoo history, tattooing has always been competitive between tattooers. Tattooers in the past have been known to safe guard secrets of the trade. A lot of women that tattooed in the old timey days where instructed by their husbands and that is how they became a tattooer.
Sometime later more women started tattooing on their own without the association of a male. (I am wondering where the feminist art movement in the 70's fits in with all this...)So anyway as I started tattooing in the late 90's there were some women in tattooing on the map. Very inspirational! However,  the big names in the business was and is still men. Men owned tattooing.
When I started tattooing in SF in the 2003 I worked with other gals for the first time. All of a sudden I go from dudes everywhere to women tattooing! Everywhere! There was and is no shortage of women tattooing in the SF bay area. And they are good! Really good. They hold their own and the seem to be respected. However there is still this weird immaturity-air-around boys are better than girls thing. I was really feeling it among the traditional style guys. Like they are keeping it so traditional that they even believe women don't have a place in tattooing. But even still you know how inferiority complexes go- If boys (someone, any sex) is insecure about their position being competitive with another in their field, their attitude is just plain, well, stupid. 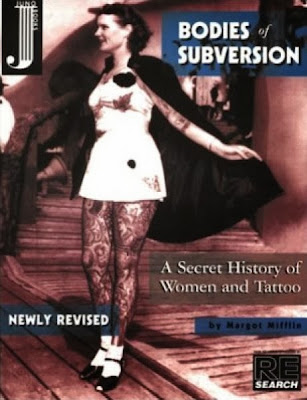 So here I am 22-23 years old in the middle of a boys vs. girls match. So lame. Now around this time I could pull really nice lines and pack in color solid. But that is still not enough for some and I still have not deserved a place in tattooing according to others. I hate having something to prove! Especially to others- and men. I already have my own personal drama of stife inside me going on. That is my personal take. Aside of that in the industry there is a rival of dudes vs. ladies going on. I have to mention that when Kat Von D became a famous female tattoo artist that became almost revolutionary. The masses loved her and her work. Everyone that came into the shop brought her up. I think it was a good thing. It spot lighted women in the industry and I think it made people that get tattooed think about how great it is to be tattooed by a woman and started supporting women more. On the other hand I think women coming up did and does ruffle boy's that tattoo, feathers. It is like that scene in Anchor man (Ron Burgandy), when Will Ferrel is in the bar and pist that a woman became lead anchor and the bar tender (Danny Trejo) gives him this great lecture about how times have changed and women are good at stuff now. Well, that goes for the tattoo industry. Women that are bad ass tattooers are coming up in the world and boys need to move aside-, there is space for everyone.
I have totally experienced working with guys at a shop where they thought I sucked just because I was a girl. It used to get to me then. Now I couldn't give two shits. I guess after awhile you just build confidence and believe in what you are doing, so what others say don't phase you so much. 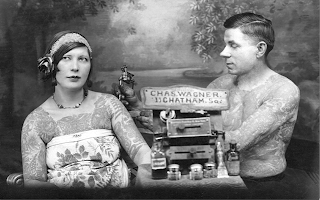 I think tattooing has come a long way. I don't mind that it has become commercial. There is public things that maybe are not best for the industry but everyone looks at things different. What is most important is that the people that are in the industry love tattooing and care for it and do the best to represent tattooing in a positive way.  If you have no love for the tattoo world, man or woman you don't deserve to be here. That's how I see it. XOXO ~J

Email ThisBlogThis!Share to TwitterShare to FacebookShare to Pinterest
Labels: women in tattooing