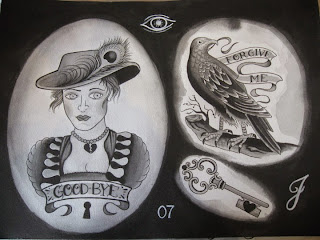 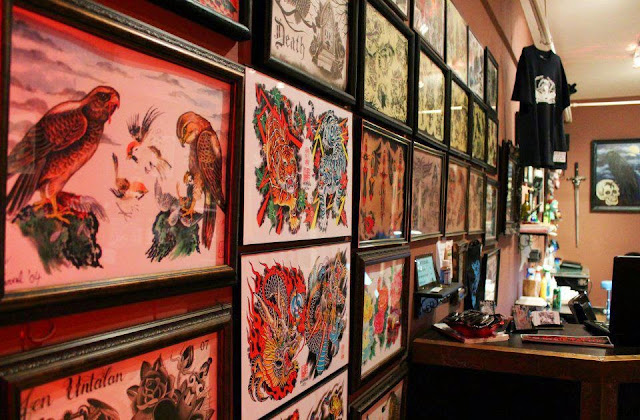 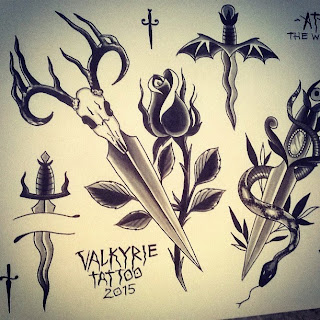 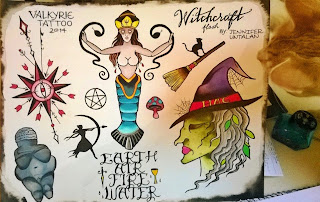 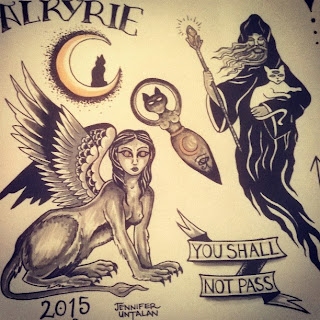 I recently have set the goal for myself to draw one page of flash a week. For those of you who do not know what flash is- flash is the art that is drawn by tattooers that decorate tattoo shops walls. Flash is set up so you can choose a pre drawn image and have it tattooed on you in a quickly enough manor. For many years this was the way people received tattoos. This was just the way it was. When I first started tattooing I did a lot of flash but then it quickly moved to a different approach in the way clients asked for the tattoos they wanted. As the word "custom tattoo" grew and became more desirable and the way-about-getting a tattoo- has changed the tattoo scene and industry a lot. 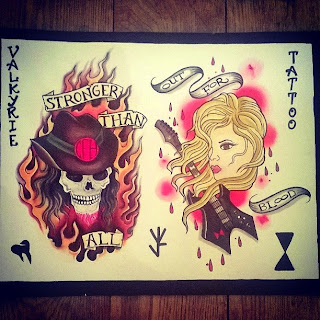 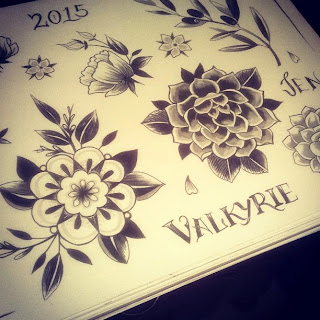 I try to draw as much flash as I can through out my career and have years where I don't even have a full set- which is usually 4-6 pages.
Here is some samples through the years where I have experimented, taught myself techniques, and just hoped that someone would want to get one of my pieces.
Unfortunatly, some people think that getting a piece of flash means that you are not getting a unique piece. That many others may have that tattoo, down playing individualism. I believe that is on the contrary. Flash designs are awesome. They are specifically built to make a perfect tattoo on skin, that will hold up over time, keeping their shape better than some other "custom" designs. Flash is a huge part of tattoo history and should keep on being celebrated as a special part of the tattoo culture. At most shops the resident artists have flash that they have drawn themselves that you could choose from, thus supporting the artist even further more by getting one of their pieces. There is also flash that is drawn by artists from all over the world that the shop has collected over time. So, you really can't go wrong by picking a piece of flash off the wall.
Lastly, there is no difference from choosing an image off of google or pinterest. Hundreds of people are getting the same images of the internet. If you really want something one of a kind, you need to speak to your artist and get their opinion of what tattoo is best for you. Some images that are traditional, like roses will be done forever because they are simply tried and true. Don't be too quick to say "everyone else has that". Get what you want if you think it looks cool and leave it at that.
Posted by Unknown at 2:34 PM No comments: