Maybe it is the new year that's coming on, but I am feeling sentimental!
Every once in awhile I go through my sketch file- which consists of a envelope about the size of 24" by 36".
I tend to dive into it about once a year, clean out the garbage, sift through the sketches that didn't make it as a tattoo, wish they were a tattoo...I started collecting the drawings in 2005 they are pretty much my keepers- drawings that I can still learn from. I have such an abundance I am thinking about turning them into a book. This idea dawned on me when a customer asked me what I did with all the drawings- I told her they just get shoved in a folder to collect dust and mold and their fate is basically to get wrinkly.

Perhaps their future is to finally be put on the skin and be brought into day light!
Posted by Unknown at 2:25 PM No comments: 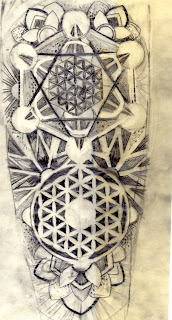 Here is a recent sketch I came up with for a pocket watch tattoo. And here is another sketch of that Sacred Geo piece I did that I posted on FB.
And don't forget to read that blog before this one, it is about placements for tattoos. :)
Posted by Unknown at 2:43 PM No comments:

I am pretty sire I have not written about this before, but the other night this idea popped into my head around 2 am and I basically could not go to sleep. I think because earlier that day someone came in and wanted a tattoo done somewhere on their arm, that just didn't work. I find myself saying the same thing over and over to people that come in.
The typical places that are difficult to tattoo and heal are : The feet, the hands (fingers and palms) the neck side and back, The elbow etc.
I tattoo on the feet all the time. I am a confident foot tattooer and as long as the client takes care of it, there is usually not a problem with this area.
But when it comes to the other trouble zones, like the hands I usually won't tattoo someone there unless they are already heavily tattooed and know the deal. That is the same rule I have for the neck too. But the reason I  don't tattoo the neck is because that could ruin someone's life if they are not in the tattoo business. Having a neck tattoo puts you in a different area of society, well it used to anyway but now it looks like young people put tattoos on their necks anyway, which I think is bad form from the artist.
Now I want to talk about the arm. I see this all the time on people and it is so fucked up. When doing a big piece on the arm like a sleeve, the elbow can be the hardest spot to address on the arm. I often refer to this area as no mans land. Basically I think it is best just to do fill work around the elbow with like back ground or some subtle shading. Never put and important part of the piece like a head of a figure on the elbow. This most certainly will look like shit in a very short amount of time. The skin texture is so wrinkly there. So If you are going to do a troll I suppose that could work there. If you are not at the caliber of tattooing as say like Shige, Phillip Leu or Paul Booth just stay out of there.
Posted by Unknown at 1:48 PM No comments: