I may have written a thing about this before, but I compelled to write another report, on my beloved Valkyries! For your Norse mythology entertainment, if you do enjoy this read, good! Cause you should know about the Valkyries!
First off I want to start about my personal connections with the Valkyries- Valkyrie is my spiritual name. It was given to me about 4 years ago, and it was by a woman who looked at me and said " you are so Val." It never dawned on me before, but that is awesome that someone else picked up on it and named it for me. There is only a few people who call me Val actually and I never introduce myself as Val but maybe I should. The Valkyries are so damn cool! 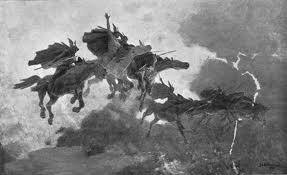 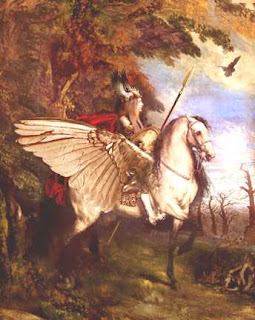 Valkyrie actually means to choose.  (Chooser of the honorable slain.) -To choose the slain that have died in battle.  Ya, sorta like angels. The Valkyries choose the men that were the bravest of Warriors and ride them off to Valhalla.  Valhalla is a whole other subject. The Valkyries are extremely tough and brave themselves. Valkyries are Warrior Goddess as well, and they either may ride in on their horses for extracting the Warriors or they may fly in themselves with wings attached to their bodies. The Valkyries play a vital role in the Norse mythology. I can not write about the Valkyries without mentioning Freya. She is the Queen of the Valkyries. She has her own amazing skills and attributes. And a whole other story on her next time. On the romantic side Valkyries were known to often to fall in love with mortal Hero's. Here is a lovely poem I found :

Darraðarljóð
Describing the fall of Brian Boru to Viking forces at the Battle of Clontarf, 1014
Blood rains from the cloudy web
On the broad loom of slaughter.
The web of man grey as armor
Is now being woven; the Valkyries
Will cross it with a crimson weft.
The warp is made of human entrails;
Human heads are used as heddle-weights;
The heddle rods are blood-wet spears;
The shafts are iron-bound and arrows are the shuttles.
With swords we will weave this web of battle.
The Valkyries go weaving with drawn swords,
Hild and Hjorthrimul, Sanngrid and Svipul.
Spears will shatter shields will splinter,
Swords will gnaw like wolves through armor.
Let us now wind the web of war
Which the young king once waged.
Let us advance and wade through the ranks,
Where friends of ours are exchanging blows.
Let us now wind the web of war
And then follow the king to battle
Gunn and Gondul can see there
The blood-spattered shields that guarded the king.
Let us now wind the web of war
Where the warrior banners are forging forward
Let his life not be taken;
Only the Valkyries can choose the slain.
Lands will be ruled by new peoples
Who once inhabited outlying headlands.
We pronounce a great king destined to die;
Now an earl is felled by spears.
The men of Ireland will suffer a grief
That will never grow old in the minds of men.
The web is now woven and the battlefield reddened;
The news of disaster will spread through lands.
It is horrible now to look around
As a blood-red cloud darkens the sky.
The heavens are stained with the blood of men,
As the Valkyries sing their song.
We sang well victory songs
For the young king; hail to our singing!
Let him who listens to our Valkyrie song
Learn it well and tell it to others.
Let us ride our horses hard on bare backs,
With swords unsheathed away from here!
And then they tore the woven cloth from the loom and ripped it to pieces, each keeping the shred she held in her hands... The women mounted their horses and rode away, six to the south and six to the north.
And more Valkyrie entertainment

Posted by Unknown at 1:19 PM No comments: 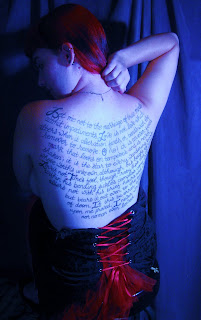 So when she first came to me and wanted this lettering, she handed me this typed up, so it was about two paragraphs long. She wanted it on her arm or ribs, but after I looked at the length of words, I knew that was going to be impossible. I told her that lettering has to be a certain size or else it just bleeds together and becomes illegible. I worked on it and the typed up version became a foot and half long with a foot or so in span across. It was so much bigger than what she thought it would, but this is the only way to make this amount of lettering work. I also told her I thought the only place it would work would be on her back, since it is the flattest, workable space on the body. Lettering on the ribs is really hard, it curves and keeping it on a straight line is so impossible. That goes with pretty much everywhere else on the body too. The body is an organic shape and to have something perfectly straight and type set can look really rigid on a body...This was also her first tattoo, and I think after our consulting we really agreed upon the outcome of this piece. It sucks to do lettering small, and sometimes I have to because the clients insists. Another thing about this piece is there is a liability for typos! It was so hard for me to get into a flow on the piece because I spell checked it a hundred times, and then while I was tattooing it I kept spell checking cause I was so afraid to misspell something. Anyway this tattoo was very hard for me to do. It took three sittings total to complete and we are talking about adding to it. This piece really made my wrist cramp up and I don't think I would take on another piece like that in the future. I don't want anyone getting ideas that this kind of piece just flows from me effortlessly! :) 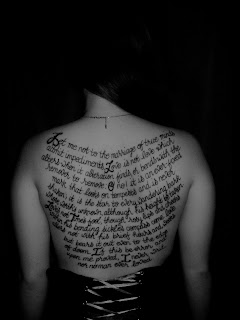 Posted by Unknown at 2:44 PM No comments:

I just discoverd that you can click on the photos and the pictures opens up larger in a new window!

Posted by Unknown at 1:38 PM No comments:

Last night during my last appointment, me and my client got into a conversation about why we get tattooed and what getting tattooed is like.  I said there is so many different reasons why to get something tattooed. But later that night- I think I may have been going to sleep, I thought of one reason why I get tattooed and I think it is so I don't forget! I can look at each of my tattoos and know and remember almost exactly what I was going through at that time. I am like a tattoo hoarder!
Posted by Unknown at 1:33 PM No comments:

Back in the saddle 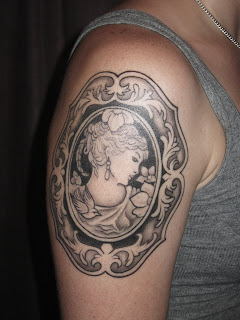 I recently went to Portland Oregon and got back early this week. It was nice to give my hand a break from working. I was hoping my callous on my knuckle would go away since I was taking a week off from tattooing, but no such luck. It is here to stay. I gotta adjust the screws on my machine and do some other work to it. The weight of machine rests on my index knuckle and it is kinda fucking it up. That is just one of the many things on my list to do.
So, here is two pieces I completed before I left. Some nice feminine pieces that suited these ladies very well, I thought.

It has been kinda quite around the shop lately, no wierdos have been really coming in, I have not had to kick anyone out or anything. It has been pleasant. Tattoos have been gettin' done smoothly...I even had time to figure out what I am going to do with that eggplant in my fridge. I'm thinking about coating it in polenta and sauteing it...Any who back to tattoo stuff. I have not watched the new LA ink. I just can't bring myself to cause I am busy watching renovation realities. That is my guilty pleasure. I hate TV and watch a minimal amount- I get enough entertain from watching humans trying to drive down the street. That's one thing I noticed in Oregon, people can't drive for shit there! Oh, and I noticed there was a shit ton of joggers there  and the guys go shirtless there and some of them should put their shirt on! I think that is funny that guys go shirtless and it's totally fine, but women can't. Wierd. Another side note you know what show I really want to see?, It's that one about guys growing there beards, I think it's called whisker something. I gotta look it up right now. I can't miss that!
Posted by Unknown at 7:27 PM No comments: